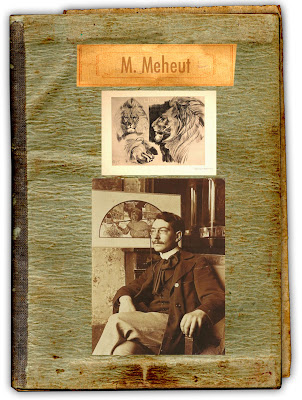 Mathurin Méheut (1882 - 1958) French painter and engraver. Though he is best known for his scenes of Breton coastal life, his magnificent animal studies are a bit of an obsession of mine, and have been a great influence on my work. I reference them constantly. I have hunted down and purchased the soft-cover book of his animal studies twice now, after previous incarnations were lost in my various moves. Creatively, I simply cannot seem to live without them. The original, foxed, taped and worried edition, btw, I found completely by chance on a clearance cart outside The Strand in NYC...which makes sense.

You can see his influence in many of my animals, in particular the monkey in the early sketch, and the fox under the sofa in my banner.
Posted by Maia at 4:27 PM

I am a children's fashion illustrator. In addition to my own shops, I have worked on commission for numerous designers including Anais & I, Enchanted Enfant, Le Vestiaire de Jeanne, Loup Charmant, Suvi Ainoa, Naive Days, Mini & Maximus etc. I do lookbook illustrations, website illustration, silkscreen illustrations, ad images, paper dolls and book illustration. I also illustrate for a number of magazines including Babiekins Magazine, La Petite Magazine, and Dream Journal.